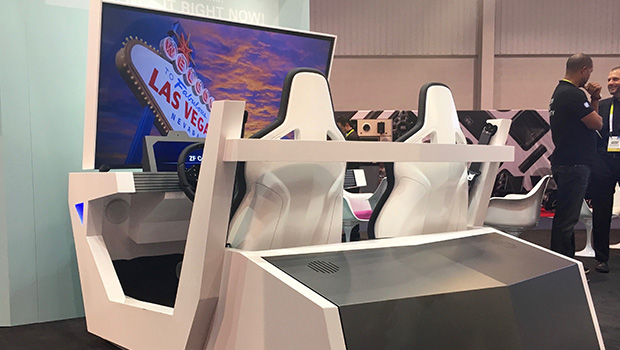 ZF - CES 2016 - Concept Cockpit The ZF Concept Cockpit offers a virtual experience of innovative future vehicle technology. 8 Minutes of CG content and an application for evaluating and controlling real vehicle components were developed. The content is presented on a 4K curved display and a “halved” full-HD display. A real-time video engine is used for playback, as well as for controlling and monitoring the vehicle components.

The entire technology is integrated within a compact space inside a futuristic cockpit, allowing it to be quickly and easily activated. The Concept Cockpit contains a collapsible and flexible steering wheel with hand recognition, a haptic touch interface, a face recognition system, a steering unit to identify BLE tags, belt buckles with comfort functions and tensioning retractors. The components and their functions are incorporated within the demonstration and permanently monitored and regulated by a specifically-designed controller, adapted to the requirements of the multi-media presentation.

Over 60 passengers a day take their seats in the cockpit, guided by a CG avatar through the concepts and visions of driving in the future. The avatar takes the form of a CG character, which has been specifically designed for the cockpit and given voice by actors recorded in CPP’s sound studio. The Cockpit is completed by a surround-sound design for traffic noises and sound effects.